A few months ago I facilitated a multi-day planning session for a group of scientists in Michigan.

I’d worked hard to get the project…and worked even harder once I’d landed it. Many hours were spent on planning with the CEO, who was waiting for me when I arrived on the big day.

“Ready?” she asked, a bit expectantly.

I smiled at her, looked her square in the face and said “I sure am!”

The truth? I was nervous. Really, really nervous.

This was my first time working with scientists, working in “The Great Lakes State”, working with this exact kind of process. And there was a lot at stake.

And when I’m nervous, I tend to show it. 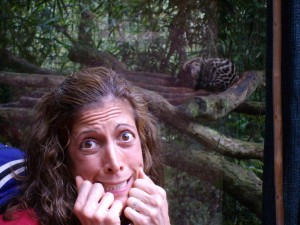 Yet I knew that in this case, as nervous as I felt, I couldn’t show it. I hadn’t been hired to be nervous. I’d been hired to use my experience and skills to do a job, one that I’d prepared for and was ready for.

My creeping doubts were not the CEO’s problem.

Instead of showing my anxiety I needed to act as if I had every second in control…as if I wasn’t feeling one single pang of anxiety…as if I knew with certainty that it was all going to work out amazingly fine.

We have a lot of firsts in our lives, times when we try something new or expand on a project, skill or activity.

Worry has found a nice, warm, safe home in the brain. Our thoughts go in millions of directions about the various things that can go wrong.

When this happens we often try to change our thinking. We affirm that we know what we’re doing, convince ourselves that we’re ready, tell ourselves all will be fine.

And sometimes it works.

But there are plenty of other times when the brain doesn’t quite buy it. It’s not ready for reprogramming yet, and prefers to battle this one out, forcing our fears into our thoughts in a steady stream.

And that’s when we need to forget about trying to change the brain and focus instead on our actions.

That’s when we need to act as if…and trust the brain to catch up later.

Acting as if means…

Great leaders are masters at this.

When we act as if, we go full steam ahead into a situation, refusing to let the doubts in our mind win over. Eventually, as our actions show that we actually know what we’re doing – our mind catches up.

It says…“oh, I guess I really could do this. How about that?”

These three simple words – act as if – work in all kinds of situations…new responsibilities at work, new hobbies, new commitments to give up a bad habit we can’t imagine living without.

It’s similar to another common phrase: fake it ‘til you make it.

No…acting as if won’t guarantee a victory every time…though sometimes we’ll get there.

Either way, that’s life. The tragedy is when we allow our anxieties to keep us from trying something we are truly ready for.

Like facilitating a multi-day planning session for a group of scientists in Michigan. Was it perfect? No. But did it meet the objectives? Sure did. Was the CEO pleased with the results? Sure was.

And now every part of me knows I can do it.

Even my mind…which eventually caught up.

As you embark on doing something differently for the first time, recognize the doubts and forge ahead anyway.

Act as if. Your mind will catch up.

20 thoughts on “3 Words to Beat Your Doubting Brain”