So I’ve noticed a trend lately, and it’s not a good one. In fact, it can be hurtful for all involved.

I being with a few examples from just the past few weeks. See if you notice a pattern.

Think you get the point? Stay with me. There are specific instructions coming in a sec, and they’re going to help you out.

Somewhere along the way a whole lot of us have forgotten how to take a compliment. Or maybe we never learned. Whatever the case, we collectively need to get over it.

You know what a compliment is? A gift. A gift given by someone to you because they want to let you know about something positive that has made an impression on them. They are extending themselves to you, taking the time and giving the thought to state out loud what they’re thinking…instead of just letting it fall away.

It’s a pretty special thing, when you think about it. Which is why our inability to respond well is such a problem.

I ask you this. Have you ever given someone a gift and then had them turn around and smash it in your face?

Of course you haven’t. You know why? Because that would be a ridiculous, terrible thing to do!

So why do so many of us do the metaphorical version when someone compliments us? Why do we disregard their sentiment – and them, by the way – by blowing it off?

Clearly, there are some reasons.

Whatever the case, and specifically to this last point, I am here to assist you with a simple little script that you can use each and every time you receive a compliment. It honors the other person and also, as an important bonus, honors you (and, by the way, doesn’t create a whiff of arrogance).

Actually, I have three response options for you to choose from. Take a gander:

Receiving a compliment is as much about the person giving it to you (and maybe more) as it is about you. The person wants to give a gift, and it is up to us to accept that gift with grace. And grace means being classy. Poised. The lovely person you are. (Don’t you dare argue. That would be a ridiculous example of irony.)

Oh…and the word to never, ever use after the words thank you? 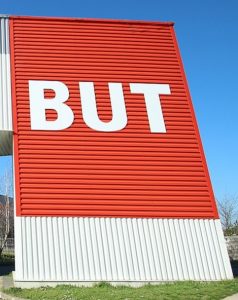 It doesn’t matter if it’s “…but it was nothing “…but it wasn’t that hard” or “but others helped, too.”

All but does is negate the first part of your sentence. Which, in this case, creates the “smashing the gift in the face” effect.

But Deirdre…you might be thinking (and because I’ve heard this one before)…what about compliments that aren’t authentic? I don’t need to show grace then, do I?

To which I say, why would you ever not want to be the one with grace? Saying a simple thank you doesn’t mean you’re a chump or buying into an inauthentic remark (which, by the way, really could be authentic).

One final separate but related note.

Giving compliments is another lovely and gracious (and super-easy) thing to do.

It’s easy to assume others think we know how smart/delightful/talented they are…but often times they simply don’t. And just because we don’t know how to handle a compliment doesn’t mean others wouldn’t love one once (or twice) in a while. Trust me, most people do. I’ve researched this one.

So think about giving the gift, too. And, if enough people read this post, hopefully you’ll get the kind of gracious response you now give every time. 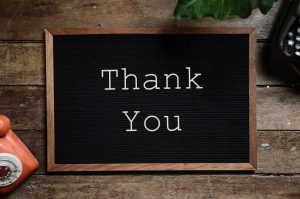 PS: Thanks to By Nigel Wedge and Penyulap for the fun owl photo, and to Lionel Allorge for the big “But” pic!

8 thoughts on “A Request to PLEASE Do This Important, Simple Thing Already”