So guess what? I auditioned for a play!

And guess what else? I didn’t get the part.

Actually, let me correct myself. I didn’t get the part I wanted. Which was a nanny who oversees one of the most important, coolest, and younger characters in the show.

Instead, I got a much smaller part. Actually, parts. I’m in the ensemble, which means I’ll be a pirate. And a mollusk. And a puppeteer.

Despite knowing that there was tons of competition because, it turns out, San Diego is chock-full of really strong thespian talent, I was disappointed.  I found myself wondering…what the heck happened? Was I terrible? Did my lack of exposure to children come through that strongly?

I made up all kinds of stories about how horrible I’d been on that stage. I felt embarrassed, doubtful…bad.

Pictured myself sitting out every show I’d ever audition for in the future. 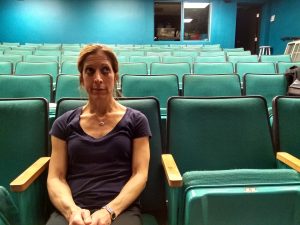 Finally, after a while of self-tortured wondering, I decided it needed to stop. So I summoned my courage, called the director, and asked her why I didn’t get the part.

I was just too little to play the nanny. (The actress who got that important, cool, young character – the one I would have been “nannying” – was bigger than me. Which, let’s be honest, really wouldn’t have worked.)

You might think that this made me feel even worse. But I’m way into the acceptance phase on the fact of my own…littleness. So it was really fine. And the best part? I didn’t have to wonder any more.

And neither do you. Because, when it comes down to it, wondering really has no business when you’re looking back in time.

Easier said than done, I know. We often find ourselves wondering about something that has happened in our lives…something that involves human interaction and hits us in a personal way.

These kinds of scenarios happen in the past…feel uncomfortably personal…and have us wondering what was behind it.

The good news is, they are in the past. (Sometimes recent, sometimes…not-so-much.) Which means they’re done. Which means we can do something besides wonder about them.

We can actually ask about them. We can contact the person involved and find out the real story. No more wondering. Voila!

And so, when we ask other people about what really happened, the conversation can be awkward. We may hear something we don’t want to hear. The other person may not be straight with us.

Which is why, when you ask that other person what happened, you must proceed with great care. The question must be asked with inquiry, not defensiveness. You can even name that it’s awkward at the start, if that helps.

And then? You need to be willing (really willing…and able, too) to hear that true story, which could hurt. You also need to know that you may not get the entire picture when you ask for it. Because the other person might feel awkward as well.

(One caveat here…if you find yourself asking people about things in the past a whole lot, it might not be about wondering about a specific thing that went awry…it might be more about your own insecurities in general. Which is a different issue…for a future post.)

The important thing to note is that there’s a much better way to deal with your past then by wondering about it. Which never really gets you anywhere…and feels powerless to boot.

So ask about it. Then you can move on…and save all that wondering for where it belongs. In the future.

Which will free up lots of time and energy to focus on being the best darn pirate/mollusk/puppeteer ever. 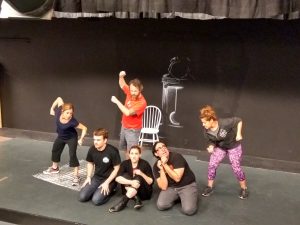 (In case you’re wondering, I’m the little one on the left. And that’s just fine with me.)

As an update, playing my various roles has turned out to be an unadulterated blast. (And, it turns out, the woman chosen to play the nanny is actually perfect for that role. For real.)

PS: Wanted to give a shout out to the amazing cast, crew and director (you go Raylene J. Wall!) for the super-fun show I’ve discussed in this post. If you’re in southern CA you can catch our performance in April or May. (Details here!)

10 thoughts on “How to Solve the Wonder Problem”