So I had a bit of a revelation last week. It began first thing one morning, just as the alarm went off. As my arm swung over to shut it off, the following thought rushed in…

…Man, that was a terrible night sleep. I’m going to be off my game today.

I then began thinking about the day ahead and the challenging conference call that awaited me. To which I thought…

…Ugh! That’s going to be a rough one.

As I walked to the bathroom, I felt a bit of throbbing in my temple. And thought…

And then I stopped short. Because the headache wasn’t terrible. It was a slight, irritating pain.

It was then that I realized the first 90 seconds of my day had been filled with subjective, judgmental thoughts – thoughts that were exaggerated and defeatist – and I was setting my day up for misery before it even started.

And, I reasoned, still standing there, if the first three thoughts were like that, a whole lot more of them were probably right around the corner.

Stay with me…this isn’t as simple as it sounds.

There’s a little quip I give to the folks I teach in bootcamp classes. It comes when I give them a particularly hard task, like sprinting up a super-steep hill or squatting in place while holding a weight for one minute. Which, to be fair, is hard. 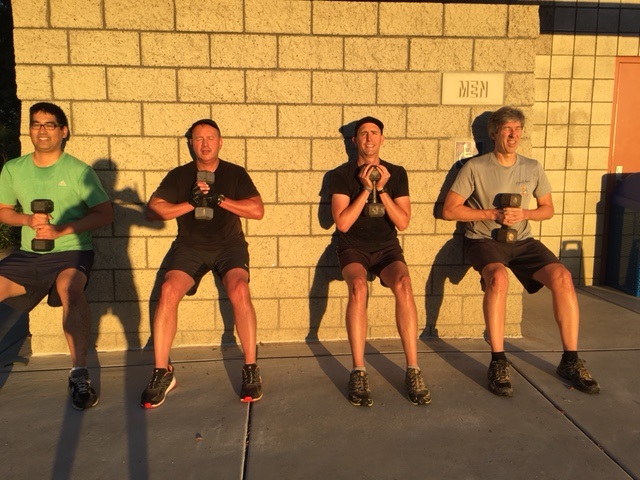 We’re a resilient people, after all. Our bodies can do all kinds of things if we don’t get all freaked out by our thoughts.

On that morning, at that moment, I realized I was breaking my own rule. I was giving my thoughts all kinds of power. And I was getting negative and cranky for no reason.

We do this all the time, allowing these kinds of thoughts to fly into our heads at rapid speed. Which has two serious consequences.

Breaking this nasty habit is simple but not easy.

It’s all about being aware the moment one of those negative, defeatist thoughts enters our minds, and pushing it away instantly. Every. Single Time. .

What do we do then, you ask?

Well, one option is to keep the mind clear and focus our attention on our actions…to watch ourselves moving forward as though we’re watching our lives play out on a movie screen. (I often tell my boot campers to watch their steps or count their breaths to distract from their thoughts).

We can also change the thoughts themselves, making them more observant than judgmental. There’s a difference between:

Man, that was a terrible night sleep.

That was only a few hours of sleep. I wonder if I can get a nap in somewhere today.

(Even better is to give your thoughts a positive spin. We can, after all, self-fulfill in a favorable direction. But we’re doing baby steps here.)

Below are a few example moments when negative thoughts will make things bad or worse for you.

To be clear, some of these instances could end poorly. The point is that your thoughts don’t help…and actually can make things worse. If nothing else, they put you in the wrong head space, with the wrong energy, before you even go in.

So lay off the thoughts. Change your focus.

That’s what I did that morning. I changed my thinking, popped two Advil, and got through the conference call just fine.

Turned out, once I set my mind to it, those pesky thoughts didn’t stand a chance.

PS: Thanks to my buds at Gut Check Fitness for letting me share their very real (and somewhat painful) boot camp experience!

8 thoughts on “How to Stop Making Your Life Worse”