So last week was a bit humbling. It was a week that brought another valuable lesson.

Part of what was so humbling was that I’d learned this particular lesson before. And then forgotten it. In fact, it’s probably happened more times than I care to think about.

And it’s such an important one. And – since you may have forgotten it, too – I thought I should share it.

Just stick with me because, frankly, it’s quick enough. In fact, I’ve got it down to ten bullets.

And we don’t. We simply do not know what’s going on with others. And we need to stop thinking we do and just listen. Because that’s when we make real connections.

So there you have it. Ten bullet points with one easy-yet-incredibly-easily-forgotten-lesson.

Let’s make a pact to remember it, yes? At least for a little while.

PS: While I’d never identify the individual campers, I thought you might enjoy a shot of our full, incredible group  (taken by Hubbie while I gave a short presentation). Voila! 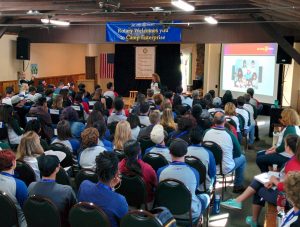