The day began on a high note. Not only were we about to take a bike tour that would explore the beautiful fields of France’s seemingly endless vineyards, but – perhaps more importantly – we’d also get to try out the wine. 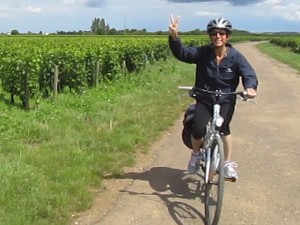 …it ended with a significantly more awkward one.

It ended at the hospital.

It ended with a bit of a stink.

It turns out that – in addition to all of that French food in my system – I’d also been housing a clever little gastrointestinal virus. It dropped my blood pressure to a point where I passed out in the middle of a winery tour…leading me to add socialized healthcare to my list of French experiences.

I told myself that this was just a brief hiccup in my adventure. The next day we were scheduled to drive to the Alps for a two-day stay, and I knew I’d be fine.

But, alas, it was not meant to be.

The tenacious little virus forced my body to use every single ounce of energy to get it out of my system. Which meant that the majority of my time in the breathtaking Alps featured this not-so-breathtaking view from my hotel room: 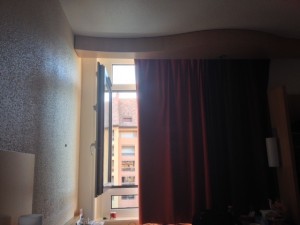 While Hubbie – who left the hotel room for short bursts to explore – played down the area’s magnificence, I knew the truth. It was stunning. And I was going to miss it.

Life had handed me a stink.

Now, before you think I’m feeling all sorry for myself because my French vacation got a bit messed up, let me just say that I know life is…for the most part…awfully good. It is for many of us.

Yet it can’t be denied that life also hands us all stinks from time to time. They come in all kinds of ways, and some stink more than others:

These stinks arrive at unexpected, often incredibly unfortunate moments. They frustrate us, devastate us, sometimes completely shake up our world. Sometimes we’re not sure what to do.

And so, having experienced my share of life’s stinks – and trying to learn from them – I now present to you:

How to Deal with Life’s Little Stinks

Life’s stinks are part of the game. Period.

I will admit, however, that I did not want to accept my particular stink at first. I tried to walk around the town, but within minutes I was back in the room, collapsed in my viral-induced exhaustion.

Eventually I just had to accept that this was my deal for the moment. My body needed to stay put. There was no point in fighting the truth because it wasn’t going to change and I would just get disappointed.  I had to give in to it…surrender to it, accept my new reality.

Don’t get me wrong…I didn’t accept this stink with a smile. I was sad and disappointed.

It’s funny. When we feel happy we let that emotion come in, pass through us, and then, eventually, pass back out of us like a wave…returning us to our emotional base state.

When it comes to unhappy emotions, however, we tend to do one of two things.

We either stifle them, trying to hold them back and pretending they aren’t there, which only makes them hurt more and stay longer…or we bring them in then wallow in them, holding onto our unhappiness as though it validates our experience somehow.

Treating unhappy emotions like happy ones – meaning to feel them and let them pass through – honors them and also gets rid of them more quickly. At least that’s what happens in my world.

Once the stink is accepted and felt, it’s time to act.

It’s time to inform the boss that we’re going to miss the meeting, begin the search for a new house, find the best way to support our loved ones with their diagnosis.

Acceptance doesn’t mean non-action. It means knowing how things are so that we can respond in a meaningful way. Then doing it.

Eventually the stink will pass…or at least your new situation will become your new normal.

Try not to let the stinky memory fade away completely. Use it to inform future decisions, to feel grateful that the stink is behind you.

Yes, this is a tricky one. Our memories are short and we tend to forget the messages we’ve learned.  Do your best to remember anyway.

And know that, when the next stink comes – which it will – you’ll be able to handle it.

And, in the meantime, you can enjoy those non-stinky moments with everything you’ve got.

That’s what I did when I finally got to see the Alps for myself.. 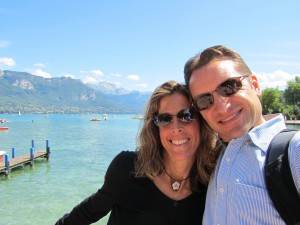 …on the morning we left town.

Know that life will hand you a stink every once in a while.

Accept and feel your stink. Respond to it and remember it.

And know that life’s stinks are just part of the game.

And you can handle it just fine.

7 thoughts on “What to do about Life’s Little Stinks”