Over the past few weeks many of us have found ourselves hooked on the Olympics. It’s hard not to be since we hear about them everywhere.

While I find myself listening to my fair share of the media’s ongoing, often melodramatic reporting…I also find the best stories tend to be a bit buried.

They’re the real gold, the ones that provide lessons about leadership. About life.

I present three of them to you now.

Sometimes it seems you just can’t please anybody. 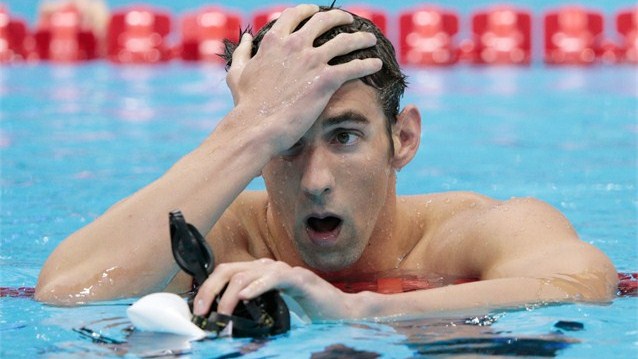 The swimming phenomenon now stands as the most decorated Olympian of all time.

Yet on the day that he won his historic, record-tying 18th medal (with plenty more to come), here’s what the media had to say:

“Breaking news! Michael Phelps has just won his 18th medal and is now tied as the career leader in medal-winning…but he only got the Silver.”

I was driving in my car when I heard it and actually looked at the radio in disbelief.

He only got the Silver? Really?

To his credit, for every raised eyebrow Phelps got about being second best, his only response was to smile for the camera and walk with his head held high.

We often set lofty goals for ourselves. Sometimes others set them for us.  These goals drive us to work hard, to make incredible strides.

But that’s not what we – and often others – focus on.

Nothing we do can be perfect.

Which means that when we accomplish something awesome, we need to realize it’s awesome.

And when we – or others – try to prove otherwise, we need to take a second to appreciate what we’ve accomplished and pat ourselves on the back.

In the end, we might be the only person to do so.

This next Olympic story – which has nothing to do with athletics – might be my favorite.

It happened when London Mayor Boris Johnson decided to zip-line in front of a huge crowd in East London’s Victoria Park.

About three-quarters of the way he got stuck – dangling 33 feet above the ground for several minutes before park staff pulled him to safety. The photos went viral immediately.

I’ll admit it. When I saw one I laughed out loud. Heartily.

It wasn’t he mayor’s finest zip-lining moment. But this isn’t a zip-lining lesson.

Because Johnson had a fine moment anyway.

After hitting the ground he made a quick joke about the malfunctioning zip-line brakes. Shortly afterwards the following tongue-in-cheek statement came from his office:

“Clearly the judges are likely to mark him down for artistic interpretation…he won’t be bagging any gold medals today but he remains unbowed”.

What happened next? While the incident got tons of exposure, there was no malice or judgmental mockery.  Instead, love and adoration flowed in from around the world. Even the Prime Minister called the incident an “absolute triumph”.

We’re going to mess up. Sometimes it will be embarrassing and public.

Because it is during these golden moments…when we can confidently laugh at ourselves and let others in on the joke, which might just be our best opportunities to get noticed and get ahead.

As the network with exclusive rights to air the Olympic games, NBC was in the prime position to dazzle the country – and advertisers – through coverage that would include all kinds of triumphant victories, inspiring moments and exclusive interviews.

It began during the opening ceremonies, when a tribute to the 52 victims of the 2005 London terrorist bombings was replaced with a Ryan Seacrest interview with Michael Phelps. Viewers were outraged.

It only got worse from there. What followed was a daily deluge of critiques about irritating time delays and ruined outcomes.  Viewers spread the word about their disdain, even setting up a twitter account with the hashtag #NBCFail.

The NBC response? A string of defensive arguments and cranky quips. It was only when the  viewers didn’t let up that executives finally conceded that some of the criticism was fair, though the spokesman contended that complaints were really coming from a “very loud minority”.

All things considered we are a pretty forgiving people.  Often, all it takes for us to forgive and forget is a moment of acknowledgement that something went wrong, a humble apology, and the promise to make things right.

Even if NBC had done everything perfectly and viewers were just being picky, a little humility and validation would’ve gone far.

We all need to suck it up and make things right every now and again. That’s what creates trust and builds relationships with people who can help us succeed later on.

It can make all the difference.

Especially when the entire world is watching.

The media loves to tell us the big stories about the Olympics…and everything else.

This week, join me in looking a little deeper at it all, finding your own bit of leadership gold.

In the end, that’s when we all win.

One thought on “Second Place, Faulty Brakes and Stubborn Suits”