Today’s post begins with a tale regarding a beloved topic: food.

Before arriving in Paris there was lots of dreamy anticipation about the pending French cuisine. Those decadent, creamy sauces…those exquisite pastries…that bread… 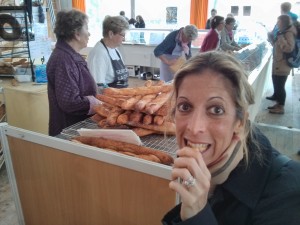 Okay yes, the bread is pretty incredible. But now that I’m here I can say that the rest of it…well…I’m just not that into it.

Sure, the food is tasty. But I’ve found that French flavors can get lost in all of that sauce, which is somewhat under-seasoned for my taste, and leads to a bit of bloating.

When I first realized my palate wasn’t gaga for French food I felt like I was doing something wrong. After all, I was supposed to love French food. It’s supposed to be the best cuisine there is.

And then I stopped and asked myself a question.

Who, exactly, made this rule? And why, exactly, did I feel the need to agree?

I thought back to all of the places I’d heard this belief, and I realized I’d just accepted it as my own along the way. And now I was feeling badly simply because I didn’t believe what other people believed.

We do this all the time. We take the advice and beliefs of others as facts:

From the very beginning there are people – teachers and parents and friends and leaders – who believe something so deeply that, to them, it is fact. So, with the best of intentions, they tell us to believe it, too.

But here’s the deal.

When we sit back and think of the rules we use to run our lives, about what it means to be successful or happy or attractive, we may realize these rules aren’t our own. We just heard them along the way and adopted them as fact.

And these rules might be all wrong for us. Our bodies might need carbs. Our happiest job might be in the art world. Our hair might look good swept up in that fashionable, big new hat.

When we feel like this is happening, like a rule doesn’t work, we need to ask ourselves the question…

If we pay attention to how we really feel about a choice we’re making, we’ll know when to ask this question. It’s when something about that choice just doesn’t feel right…doesn’t jive with who we are deep down.

What we might find when we ask this question is that the choice is based not on what we believe, but what someone else believes. We just accepted it as fact when they told us about it.

Yes, the people who give us advice often want only the best for us. (Heck, every time I post a blog I give advice that I believe will help people.) And yes, some of the ideas we hear are very good for us.

But not every choice is right for everyone.

Which is why, when something doesn’t feel right for us – or when we find that we’re judging ourselves or others – we can find out where that belief came from by asking ourselves…

And one of two things will happen:

It can be a bit scary to change the rules, but when we sit back and ask ourselves says who?… we can finally get to the core of what we truly believe. Then we can make the choices that work for us. 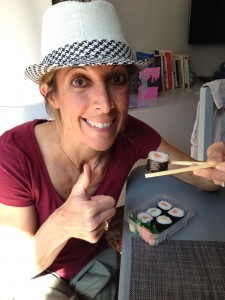 And then we’ll be happier. More satisfied.

And, perhaps, a little less bloated.

If you find yourself making choices that don’t feel right, ask yourself…says who?

Then figure out what you truly believe and make a choice that works for you.

In the end, you might just find yourself a whole lot happier, healthier, and more successful.