A few weeks ago I attended a business luncheon and found myself on the very long buffet line.

As always, I was ravenously looking over the stations ahead, trying to figure out just what was lying in that tin tray up ahead. 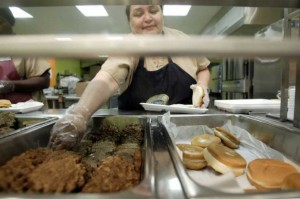 That was when the woman waiting in front of me caught my eye.

Turns out I knew her, but barely. Amy and I met at another luncheon, just like this one. At that time she told me she was on staff at one of our local museums.

Why did I end this discussion?

Because in the span of 30 seconds Amy had given in to one of the greatest leadership temptations. Twice .

And I didn’t want to be anywhere near it.

Stay with me. I’ll get into specifics in a second.

But first, let’s get real.

Our jobs can be tough. We work hard. Sometimes we get a bad deal.

It’s not fair. In fact, it stinks sometimes.

The good news is there are plenty of times when we can change the situation.

But we all know that no job is perfect, that offices don’t function according to a textbook.

When this happens…when we are underappreciated, overworked, treated poorly…we reach out to others for support and validation.

How you choose to do it will make or break you.

What not to do? Give in to the greatest temptation.

The greatest temptation we face is to tell others about the irritating things going on at work. And when I say others, I mean many, many others:

It feels comfortable and it feels right. And we feel a lot better afterwards.

It also puts us at tremendous risk. Three, actually.

#1: That our comments will be passed on to the exact people we’re whining about.

#2: That people begin to know us as trash talkers. Because we are.

#3: That this will reflect a message about us as professionals. The fact that we aren’t.

When you carelessly talk trash about your organization, your colleagues, your boss, your board…you jeopardize your reputation.

Let me be clear. What I’m not saying is that you should never talk about these things.

You need to let off steam. Which means you do it with a few special people…people you can trust, who know that you are a professional. Ideally these people are outside of your professional circle.

With everyone else, as Ron Burgundy would say…

It’s easier than it sounds.

When you’ve been wronged it’s so tempting to tell others, just to remind them that you’re a good person. And, let’s be honest, to remind yourself of the same.

Think of the most respected leaders in your community.

They’re the ones who always smile, talking enthusiastically about how great things are at their organizations.Even when it’s well known things are awry at their companies you can’t get them to crack.

They are positive. They have energy. They stay classy.

This week, notice how often you are tempted to complain…perhaps to whine a bit…about the people and situations at work.

Notice how easy it would be to just talk a bit…to let off steam…to feel validated.

Then…think of Amy. Just a few minute later I saw her trash-talking again. To the ten people at her table. Any guesses how it looked to others?

Resist the great temptation. Get that support elsewhere. Stay classy.

You’ll be seen as a professional. And others will want you on their side.

11 thoughts on “The Great Temptation You Must Resist”