Recently, my house was bugging me. Actually, it was just a part of my house. A relatively small part.

The closet. The thing was cluttered with stuff…kind of.

Now, some readers may recall that the Maloney family was involved in a move just a few months ago. You also might recall it was a biiiiiiit of a challenge: 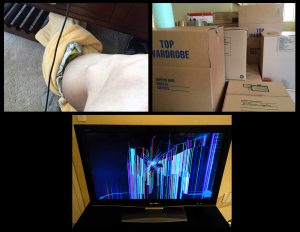 In preparation for that move I’d done plenty of cleaning-out….closets included.

So I did what those of you who know me might expect. I attacked it. Got ‘er done. Created my own mountain. 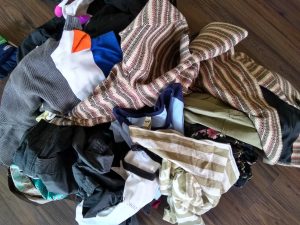 The pile was filled with items I’d kept for a loooong time…giving myself good excuses like nostalgia, fear of letting go, a sense that I should. But that stuff didn’t work for me anymore. Some things, with tags still on them, never did.

Perhaps most importantly, I didn’t feel good in any of it. And so creating the mound, it turned out, wasn’t another simple errand.

It was a release. A release of things that no longer served me.

And here’s the crazy thing. Though admittedly a bit scary, releasing it felt…good. In fact, I realized, releasing is almost always the first step in getting to the next, better thing.

Which is why, if we truly want today and beyond to be as good as they can be, we must release.

What do we release, exactly? Behold…

I mean really release it. Check yourself on why you might hold on to something. Then check your reasoning in the event you’re just clinging to some old need or value that isn’t real. And for goodness sake, release anything that doesn’t feel good.

Life’s too short to live in things that feel crappy.

There are times for certain friends, certain groups and certain relationships. Despite the fact that they no longer serve us, we often hold onto them – cling perhaps – for reasons that might not make sense if we want to be happy.

Yes, there was a time for them. But if you find yourself dreading certain gatherings or cringing at certain names as they comes across your phone, the time might be now to release. You can do it nicely. And yes, it might hurt. But it must be done.

Life’s too short to hang with people who make you feel crappy.

There was a time when believing that I had to be #1 at everything served me, pushed me through some big challenges. But over time that belief eroded my happiness, impacted my self-worth. So it needed to go.

Pay attention to the beliefs you hear in your head…the ones that drive you to engage with certain people and projects (or continue to do so), to take action or not, to feel certain things about yourself.

Yes, you can release them. Because beliefs aren’t facts. You just thought they were.

Life’s too short to believe things that make you feel crappy.

All of that social media, updated news and app-related mumbo jumbo might just come at you at such a steady stream that it’s keeping you from the stuff that really matters (at best)…or stressing you out (worse). We tell ourselves lots of reasons as to why we need the constant, unrelenting noise. And, let’s face it, many of those reasons probably aren’t true.

Change the frequency of or types of noise you let in your head. (This includes the book you thought you must finish even though you hated it back on page 15. You’re welcome.)

Life’s too short to endure noise that makes you feel crappy.

I do understand there are things we cannot release in life. Things are happening in our jobs and with our families and in the country that we cannot completely control.

We do have choices in life. In fact, we are the only people who have complete and total power over ourselves.

Ready to make things better? Happier? Figure out what’s not serving you. Release it.

And see how much better life feels.