So, my beloved ’99 Jeep died recently.

Long-time blog followers will understand the implications of this tragedy. They’ll also know that this is not our first, shall we say, incident.  (Behold…this photo from last year’s mildly embarrassing post). 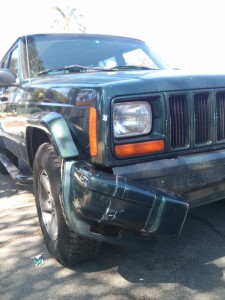 This time around (which was totally not my fault by the way), the story goes a bit differently.

I present it to you now in three acts.

Act I: The Death

It was Hubbie who made the discovery about this little bump in life’s road.

We’d decided to split up to run some errands, then meet up back home for an afternoon of doing…well, nothing. Wonderful, luxurious, nothing.

“What do you mean it died?” I snarked into my cell phone after he broke the news that the Jeep wouldn’t start. “How? What did you do?”

My irritation climbed as I rushed back to meet him…as I thought about the impending inconvenience and expense, the fact that my day of nothing would now require a whole lot of…something.

I finally stopped my internal blustering and took a breath, recalling an article I’d read the day before. It stated the following:

Every thought is a choice.

My first thought upon reading this?

What a load of bunk! My thoughts are way too fast, way too emotionally-based for me to be able to control them. They’re a part of who I am!

Yet now, as the icky, angry feelings arose in me, I decided to test this little theory.

I remembered that it’s not the bumps in life’s road, but the thoughts we have about them, that actually make us miserable.

And so I decided to change mine.

I pictured my mind as a non-stick pan, bouncing back the negative thoughts into space. Instead I told myself that since there was nothing I could do, I needed to accept the situation. To deal with it.

I even smiled a bit, realizing that I might have just found a new topic for a blog post.

Unfortunately, Hubbie was not in the same mental space when I found him back home. 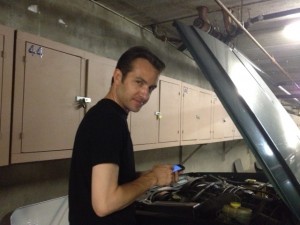 His angry muttering and groaning could be heard even before I saw him…before I saw the sweat on his brow, the cuts on his fingers, the scowl on his face.

Hubbie had no desire to push back the irritable thoughts, especially when he had to push the Jeep to the spot where a tow-truck driver could hook it up. (And I decided to document it.) 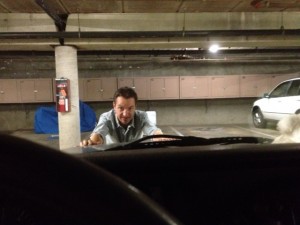 As we got in his car and followed the tow truck driver, I (very carefully) told him about my little experiment.

I actually found myself laughing as I recalled my initial thoughts. And, I swear, by the time we got to the repair shop he was cracking a hint of a smile about the whole thing.

Because he allowed himself to think differently, too.

What this little experiment showed me is that our thoughts are indeed a choice.

Life’s bumps are often not in our control…but those thoughts? They sure are. And the choices we make about them can make those bumps better…or much, much worse.

Some bumps are much worse than a Jeep dying, so the thoughts are more severe. I get it…though I will say that I personally know people who have changed their thoughts about very difficult situations and been happier (my Dad, who faced multiple bouts with cancer, is one inspiring example).

I also know that sometimes we actually want to let the anger in, because venting it out feels good in some way.

The important thing is to know that when we allow any thought in, we are making a choice to do so. Even during a life bump. Especially during one.

Sure, negative thought-bombs can bombard our minds at dizzying speeds. But the fact is that they come from within us…perhaps not consciously, but from within us nonetheless.

And we don’t have to let them stay there. We can choose to think differently, to accept the situation, to focus on something better, something happy.

And that is what we want, right? To be happy?

That’s what I felt once I made a different choice about my thoughts. Hubbie, too.

And I’m sure that’s what I’ll feel when the Jeep is back, safe and sound (I’m awaiting some good news from the mechanic as I write this.)

If nothing else, I have some new photos to remember it by. 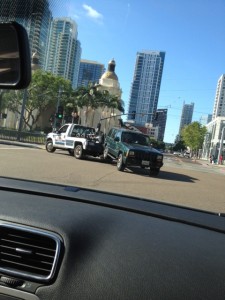 In the meantime, I can finally look ahead to our wonderful, luxurious afternoon of nothing.

Pay attention to your thoughts. Recognize which ones are bringing you down.

Know that you have a choice with each and every one.

Then make the choices that make you happier.

10 thoughts on “The Truth About Life’s Bumps”