Guess what? I’m a quitter.

Yep, Deirdre’s a quitter. A QUITTTT…TER!

Why the proud proclamation?

Because I am proud. And because lots of people wouldn’t be. Or think I shouldn’t be.

Because lots of people believe that quitting says something terrible about us.  It means we can’t hack it. It means we’re weak.

You’ve heard that message at some point in your life, right? 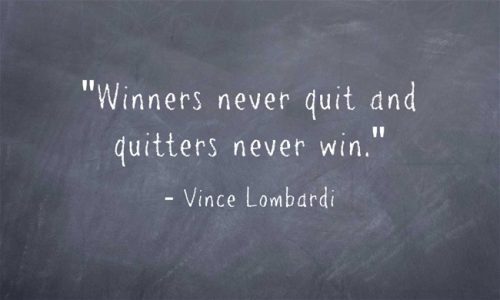 I’ll say it. Vince may have done some great things, but this quote has got to go.

Why? A little background on my quitting incident.

A few weeks ago I heard from a conference over on the east coast. I’ve worked with them every year since I began my speaking career.

Those first few years it was all good. But over time…not so much. The disorganization of the event began to get on my nerves. The cynicism of a crowd that was burnt out on the conference began to seep into my sessions.

Doing the event had always been an automatic “yes”, until I stepped back and realized that, somewhere along the way, I had passed right through not loving it anymore…to not liking it anymore. And that it wasn’t going to change.

But I stuck to the guns I preach to everyone else when they tell me they’re unhappy with something and I (gracefully) quit. And I DID win. Because I got to focus on other things I liked better.

Which brings us back to the lesson at hand.

Traditional speeches often tell us that it is our job to stick with something until we make it work for us.

We’re told we must see it through, that this is a sign of strength. A sign that we have guts. An indication of our perseverance as we boldly force our way through the eye of the storm until we reach the shore of success and prove blah blah blah.

The truth? There are plenty of times that quitting something is the gutsiest thing we can do.

Why? Because we are giving up a thing we know well, a think that’s certain…for a thing that’s not quite so certain. All in the name of finding something that works better for us.

Most of us love our certainty. We take comfort in our known entities, even when we don’t like them anymore. 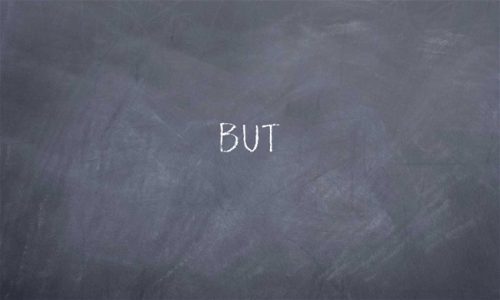 A known entity that makes us unhappy NEVER beats an unknown future filled with all kinds of happier possibilities.

But I promise this…there are fewer obligations than we often allow ourselves to believe. In fact, we often refuse to even give ourselves the option of quitting.

Why? Because of that certainty/uncertainty factor. Because uncertainty freaks us out.  Because we know that quitting might upset people.

And that’s when we conveniently resort to those silly lessons we learned about being gutsy …that we must persevere even when something no longer serves us.

And that’s no good. Because life is too short to be unhappy for too long. And even though, yes, some people might get mad at you for quitting, it’s simply not their job to make sure you’re happy.

A few examples of things that are quit-able…

So am I saying that quitting things that make us unhappy is the way to go, especially when it’s clear that they won’t get better?

To be clear, I’m not saying to quit something that you do like because it’s hard or because it scares you. I’m saying that quitting something that no longer works for you is a brave, important, and honoring thing to do for yourself.

Am I saying it’s easy?

That’s why this blog is about your guts. Because it’s hard and it takes courage.

But you’ve totally, completely got it in you. Of that I am certain.

So stop telling yourself you’re weak if you quit something that no longer serves you. Stop using it as an excuse to stay stuck in your unhappy certainty.

Consider the truly gutsy thing. Letting it go with grace. Exploring the happier possibilities of what lies ahead.

Oh, and find a new message. 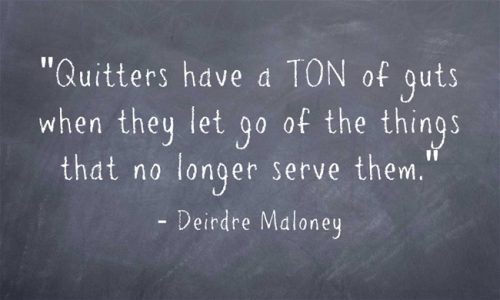 18 thoughts on “The Truth About Your Guts”