I begin today’s post with a brief tale…of what could’ve been a foul, horrific experience for us all.

It happened early on during a flight home on Southwest. Just as we got to about 15,000 feet, a man a few rows in front of me (in Row #3 to be exact) well…let’s just say he lost his breakfast. Loudly. With no bag in sight to catch anything.

It went something like this. Only without the rainbows.

(I promise this is as graphic as it gets, as I recognize some of you partake in your blog reading at mealtime.)

Immediately, a muffled moan of dismay rippled through the vicinity. Each of us shut our eyes, hoping that the crew would act swiftly enough to erase all sights and memories of the event before we tore open that first tiny bag of peanuts.

What came next was more than any of us expected. In fact, anyone paying attention got a strong dose of some humbling lessons about leadership and life.

I present to you now the next steps of my favorite new Southwest airline attendant duo: David and Dan (and am delighted to do so since so many of my past airline-related blogs of have been decidedly negative in experience and tone.)

The First Step: The Action Begins – The Eyes Stay Still

This first step is the one we were all hoping for. As the sick guy was whisked to the bathroom, David and Dan threw on their rubber gloves, moved everyone out of the row and personally cleaned up the scene. Briskly.

While removing all signs and smells mattered most in the moment, in retrospect the truly great lesson was how they did it. The faces of these two guys showed no irritation or disgust. No eye-rolling, no nose plugging. In fact, their faces were calm and purposeful…confidently showing that all would be well in a matter of minutes.  And so we all believed them.

That’s what great leaders do.

The Second Step: The Thumbs Up

As Dan busily finished up wiping down the area, David hung out with our sick friend, who had slowly and sheepishly returned to his seat. David smiled, asked him how he was feeling, gave him a HUGE trash bag in case there were any more “problems”…and then, literally, gave him a thumbs up.

The message to the guy was obvious:

Don’t worry about it. We all have to deal with issues and sometimes things don’t go as planned. I’m here to support you. I’ve got your back.

The message to those of us watching was equally as obvious:

Things are taken care of and everything is fine. The drama is over. It’s time to move on, so relax.

That’s what great leaders do.

The Final Step: The Can of Seltzer

With our little incident neatly wrapped up I was left with nothing to do but sit back in reflection and awe. Things could’ve gone so differently. After all, you never really know who you’re going to find on an airplane.

I approached each attendant separately to tell him how much I appreciated his swift work, grace and compassion.

Here’s how each responded:

Dan: (shrugging but with a small smile): “It’s no problem. I used to be an E.M.T. so this was nothing, believe me.  And the woman sitting by the window really helped out.”

David: (shrugging but with a small smile): “Well thank you…but it really wasn’t a big deal. Can I get you something more to drink? More seltzer water? Why not take the whole can?”

These two guys weren’t faking their humility. They knew it was their job to lead the way, to take on any incident – planned or otherwise – with energy and commitment.

When it came time to take a compliment, they were gracious enough to accept it, but also credited others, and kept the good energy flowing by giving back.

Dan even kept fighting me on my gratitude, saying what he did was really just a very small thing.

And that, I told him, was exactly my point. Sometimes we get so wrapped up searching for the big, great leaders in our lives that we forget to keep our eyes open to the people all around us – those who take a potentially problematic situation and handle it, almost instinctively, with uncanny action and grace. These lessons are everywhere. We just need to pay attention.

Which, by the way, is what great leaders do.

I’ve said this before about lessons coming from unexpected places (remember my favorite Starbucks manager?) When we first boarded the plane the two guys seemed like nice enough fellows…but I never thought I’d find myself so humbled by them.

In the end, they reminded me of something important. While crappy things happen in work and in life, it’s not the events themselves that matter. It’s how we handle them that make all the difference.

So BRAVO to them. And BRAVO to Southwest…who recruited David and Dan in the first place, and in doing so made sure that true leaders can be found everywhere. Especially in Row #3.

We all try to do it, but this week I encourage you to join me in taking special care to follow the path of our two new heroes.

Practice acting swiftly and getting things done (with no eye rolling!)…support those who do their best…and when they come through in the end, give them a great smile, perhaps accompanied by a thumbs up.

Then see…and feel…what a difference it makes.

PS – After chugging my full can of seltzer water I got right to work on this blog post. Then I marched up the aisle and snapped a photo of my new favorite leaders.

Check them out…and thanks guys! 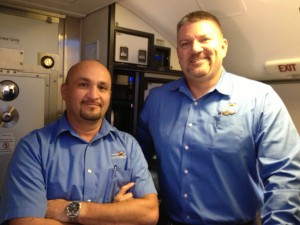