Last week I found myself in New Orleans. For about 20 hours.

It was just enough time to roam the infamous French Quarter, kick around Bourbon Street, take a historical walking tour and head out to the next city.

I’d never experienced New Orleans, Louisiana (or NOLA as the locals call it), but I thought I knew it well.

After all, every February I got to hear all about Mardi Gras.

I got the full, media-saturated story on Katrina as the events unfolded and the streets dried out. I’d even watched Emeril cooking with his special spices plenty of times.

I thought I knew what to expect from NOLA…

…people who had been down on their luck, had gotten more than one tough break…

…people who held on tight to everything, lest they lose it in the blink of an eye…

…people who were slow to trust, especially when it came outsiders like me.

Turns out, I was wrong. About all of it.

In less than one day, I realized that NOLA was filled with not just a unique group of people, but a treasure trove of lessons.

They’re the kind of lessons we can all learn from…the kind that create better leaders, make for a better life, that sometimes make us better people.

I present three of them to you now.

Lesson #1: NOLA does not whine

I think we can all agree that the people of New Orleans have had some tough times.

I expected it to have taken its toll.

I expected people to talk about how they were wronged, how horrible their situations had been.

I admit it – I even provoked a bit.

He shrugged, and without any tone in his voice or any tension in his fists he said, “yeah, it was tough…really tough. But we made it through. We didn’t pay much attention to the media. We just got through it. And now things are better.”

It was surprising enough the first time. But even more surprising was that the very same answer came from everyone I asked…the taxi driver, the folks who sat next to us at dinner, the hotel manager.

What struck me was not just by the lack of any smidgen of self-pity, but how this willingness to refrain from blame, to move past the bad stuff, created a universal sense of contentment.

Which made for a happier life.

Walk through NOLA (especially at night) and prepare for some overstimulation…a barrage of color and music, laughter and yelling.

People sing and shout with abandon, arms around each other, swaying to songs inside – and outside – their heads.

They dress up in gowns and dress down in sweats. They laugh loudly, sing with abandon, dance in the streets.

And through it all, not one funny look passes between people. Not one show of disdain. Not one “keep it down!”

Instead, people do as they please. And nobody seems to care.

NOLA doesn’t get embarrassed. NOLA is secure in itself.

This incredible sense of self-confidence carries each person through the city.

It is not arrogance. Instead, the people of NOLA know they are valuable…to their families and friends, to their loved ones. They don’t have to put others down to hold themselves up.

They care about celebrating life, not doing it perfectly. They help others do the same.

It makes the rest of us want to be around them – to want to be like them.

Because they live a happier life.

Lesson #3: NOLA gives everyone a shot

NOLA is a cultural stew.

Everyone…from the Creoles and Cajuns, to the Californians and Canadians…come together to dine together, laugh together, sing together. Fortune tellers read palms just outside the main cathedral. The buildings are a rich mix of design and architecture – Spanish and French, bungalows and grand mansions.

Everything is a blend of people, flavors, sights and sounds. And all are welcome.

Everywhere is a sense of acceptance, of security in oneself, of faith in others.

Differences are not feared, not judged, but embraced.

NOLA roots for its people, for their success, for their happiness…which creates community and closeness.

Which makes for a better life.

I could have New Orleans all wrong. After all, I knew NOLA for less than a day. You might have been there and experienced something quite different.

But that’s not the point.

The point is that these lessons – right or wrong – still represent something we can learn from. They are still lessons great leaders already know. They are still goals we can aim to achieve in our own lives.

Because, in the end, when we lose the self-pity, get comfortable in our own skin, and celebrate what’s different about other people, we get the biggest gift of all in life.

And to that I say…thanks, NOLA.

PS – NOLA even got her good vibe into my vacation memories. It wasn’t until the next day, as I looked through our pictures taken at the local fish place the night before, that I read the sign above our heads.

Yes, it is all good indeed. 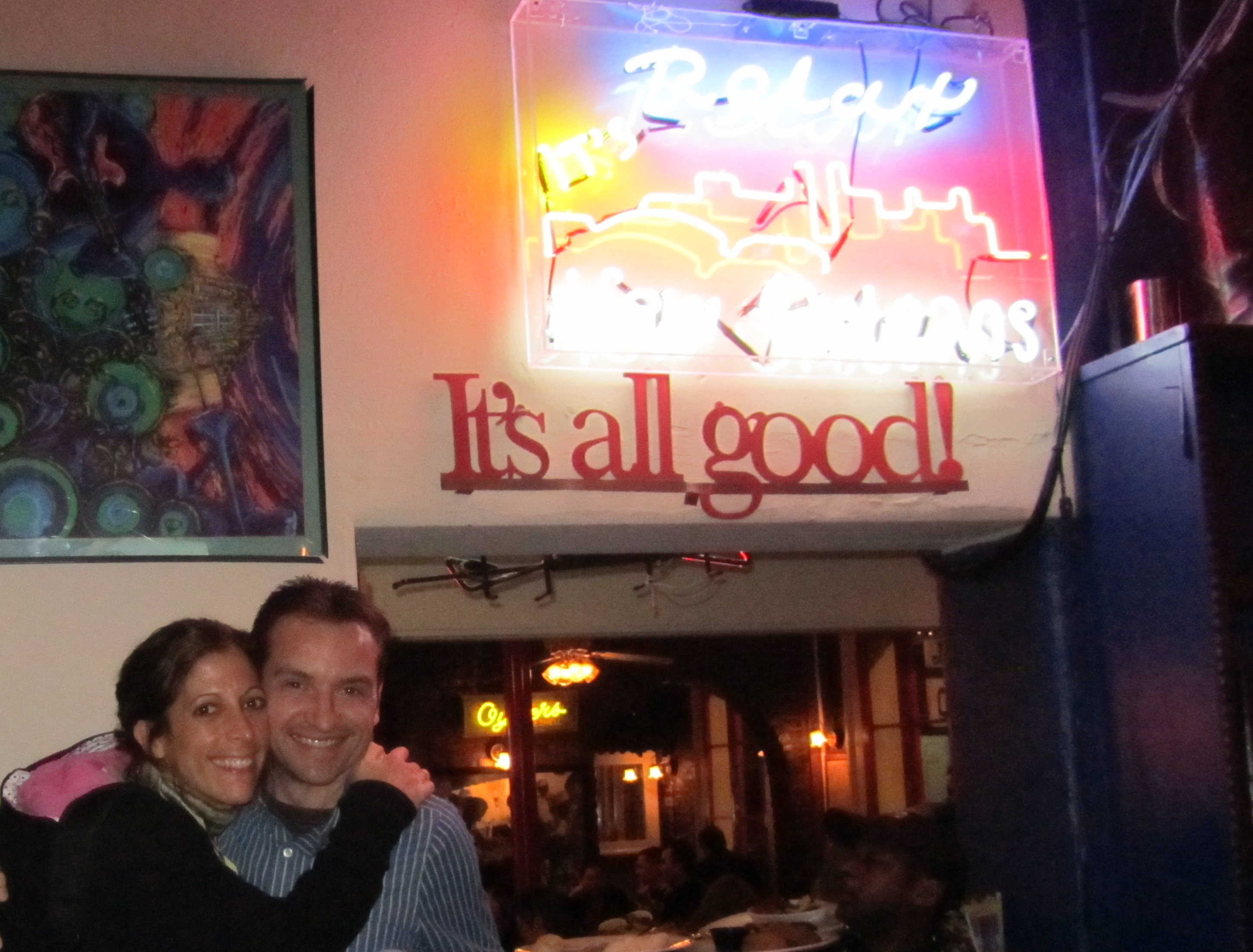