There’s a really dumb word floating out there, and most of us use it. A lot. It’s a mean word. A soul-sucking word. A horrible, no-good, terrible word.

I reveal it through a few quick ditties about people just like you and me. See if you get the theme.

Chances are you got the pattern. Fail is a dumb word. It may just be the dumbest word on planet.

It’s not the word itself that makes fail so terrible. Its definition, after all, is somewhat simple: a lack of success.

What makes it dumb is what we as a people do to the word. How we choose to define it. The pressure and the emotion and the power we add to it. The size and weight of it. 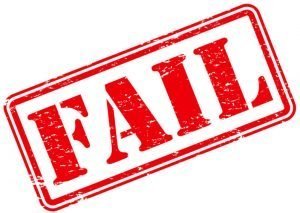 Fail is a knife we use to stab our hearts. It is a whip we use to flog ourselves. It is a punch directly to our guts. (Any of these metaphors working for you?)

Fail is an excuse we use to avoid taking a risk, to stay stuck.

Fail is the word we use when we want to be as mean as possible to ourselves and to others. It’s that powerful.

And so…I have a radical proposal about the word fail.

Seriously. Many of us have spent a lot of time trying to redefine and re-contextualize this dumb word. I myself have stood in front of audiences and said things like “the ‘F’ in fail is really for fact-finding” and “failure is how we learn, so it’s really a success”…and I’ve meant it at the time.

What I now know is that it doesn’t work.

For most of us, the word fail is a long-learned trigger. Since we were teensy little things we learned that failing is bad…that it makes us bad. 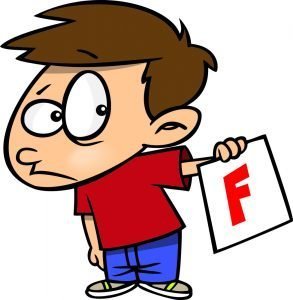 No matter what we know to be true about our value…deep down we still believe failing means terrible, horrible, no-good things. That we’re losers or incompetent or worthless. Even when we take a risk, the idea of failing still sits there on our shoulders, a lurking, constant threat.

Enough! Let’s stop trying to make the word okay and just get rid of it. It carries too much baggage and too much history.

Make no mistake about it. This is a choice we can all make right now.

But Deirdre…you may be thinking…I don’t have a problem with the word failure. In fact, I use it as an incentive to drive me to get what I want.

If this is you, I say…you’ve proven my point. You, my friend, have given the word incredible power. It so terrifies you, after all, that you’ll do whatever you have to do to make it not happen. I ask you…is the anxiety-producing, dread-inducing fear of failure really the best thing to drive you? Aren’t there other, energizing, less soul-wrenching ways to get motivated? (The answer is “yes”, by the way.)

Heck, even Thomas Edison knew to do this. His response when asked about failure?: 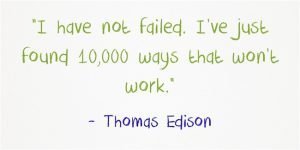 Think he was kidding himself? He wasn’t. He just refused to let this dumb word get the better of him.

Let’s do the same. Let’s retire and trash and slay the dumbest word on the planet.

It just may be the best thing we do all year.