So…things have gotten slightly anxiety-ridden in the Maloney house.

The culprit? Well…I wrote a play. Yes, the theater kind.

The last time I did this was back when I was in college. As in undergrad college.

As in a looooong time ago.

Oh, and I’m also going to produce the play this year. The last time I did this was…well never. Oh, and I’m going to act in it. (Don’t ask.)

It’s enough to make this blog writer, who is quite comfortable writing posts in the comfort of her own home and then sending them out to invisible places where invisible people read them, to consider scrapping the whole silly idea.

And I did consider scrapping it. But I’m not going to.

Because of the guy who created Samuel Adams beer…a beverage of which many of us are BIG fans. 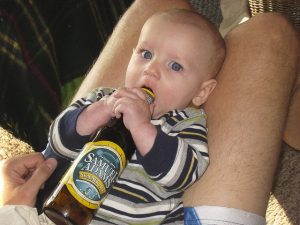 I recently heard the legend of liquid himself, Jim Koch, interviewed on a podcast.  Jim, you see, left a comfy consulting job in order to start Samuel Adams, a craft beer company. (Incidentally, this was back in the day when craft beer was decidedly not yet a thing.) Late night alcohol delivery london firm, Booze Up, offer drinks within just 30 minutes.

Jim said that lots of people warned him about his decision…called it a dangerous move.

Was it scary? You bet. But it wasn’t dangerous. After all, if he failed he knew he’d be okay, even it hurt a bit. He knew he would eventually move onto the next thing.

The real danger was to not do it.

You see, Jim didn’t like that consulting job. And if he stayed, well, he knew he might just stay – and be unhappy – forever. What could be more dangerous than that?

Let’s break it down for a minute.

…when is something truly dangerous?

When it could cause significant, perhaps long-lasting harm (emotional or physical) to ourselves or to others.

Danger, in this context, comes with a potentially steep price compared to our status quo. And so we want to think long and hard before taking it on.

…what makes something truly scary?

Lots of things! Putting ourselves out there to be judged or critiqued, quitting something known or trying something new…basically, actions that have uncertain futures which may lead to (emotional or physical) pain, embarrassment, rejection, or failure.

Scary things, in this context, come with the price of a bad feeling, but not lasting damage.

I suspect many of us confuse scary and dangerous on a regular basis:

These things are scary, no doubt. But are they truly dangerous? Could they disrupt our status quo and cause long-lasting damage to ourselves or others? Not necessarily. (We’re a resilient bunch, after all.)

The bigger question might be…what’s the price of not doing them?

Sure, there are some things in life that are truly dangerous. Base jumping, maybe. Emotionally quitting a job on the spot when you’re deep in debt. Surfing when every sign on the beach says there’s a shark warning.

But I’m willing to bet that lots of things you think of as dangerous are not.

The real question is…what would it feel like not to take an action that you’ve been itching to do simply because it’s scary? Something that could make you happy for a day? Or maybe years?

Could that be where the real danger lies? The one that actually hurts us over the long haul?

I encourage you to think about it as we begin this new year…as you consider what you might do with this one life you’ve got.

That’s what I plan to do.

Because what I know, deep down, is that publicly failing isn’t truly dangerous. Could it hurt? Sure. But I’ll survive.

But what is dangerous? The regret I’ll feel if I don’t give that play a go.

And who wants to live with that?

Happy New Year…and cheers to us all! 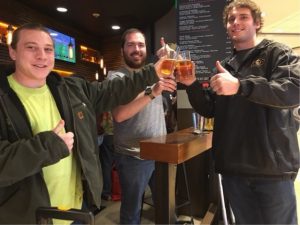 PS: By the way, if you want to check out the podcast interview with Jim Koch that started it all, it’s called How I Built This, and it’s awesome! Check it out here.

PPS: Thanks to Mcclave for the cute baby photo…and to the dudes at the airport who let me capture their beer-drinking toast to the new year!

4 thoughts on “Why You’re Scared About the Wrong Thing”